German scientist and malacologist Dr. Felix Lorenz described and published three new shells from the area of Kavieng / Papua New Guinea in 2004. The shell samples were discovered by Dietmar Amon of Lissenung Diving and forwarded to Dr. Lorenz for evaluation and classification. 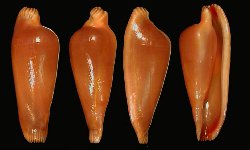 The first shell is a member of the Ovulid family or Allied Cowries and is named Archivolva lissenungensis (Lorenz 2004), after the place of discovery Lissenung Island. The shell is between 15 and 20mm long and lives extremely cryptical on a large gorgonian. The animal’s foot and mantle have the same red color as its host gorgonian and there are prominent white papillae imitating the polyps of the host, which makes it very difficult to spot them. http://www.cowries.info/shell/liss/index.html

A tiny little Olive shell is Lissenung Island’s second discovery. Janaoliva amoni, Sterba & Lorenz 2004, is only about 3 – 4mm long, translucent white and lives buried in sand. This shell is abundant but because of its size scientists most likely overlooked it to date.

The next discovery is another Ovulid, named Pseudocypraea alexhuberti, Lorenz 2005. It is about 6-8 mm long and so far, it was found only in sand samples along walls and drop offs. 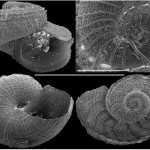 With less than 1mm in total length and a slit along the outside, Scissurella lorenzi, Geiger 2006, is the latest but also the smallest discovery from Kavieng. This shell is also found in sand samples along drop-offs and seems to be restricted to this area.

The past research around Kavieng showed an interesting range extension for many shell species. New species of other shell families like Cones and Miters are currently under study and will be described in the near future. All these discoveries add to the limited knowledge about our ocean environment and show again the amazing biodiversity of the reefs in Papua New Guinea.

For more information please e-mail us or visit www.cowries.info