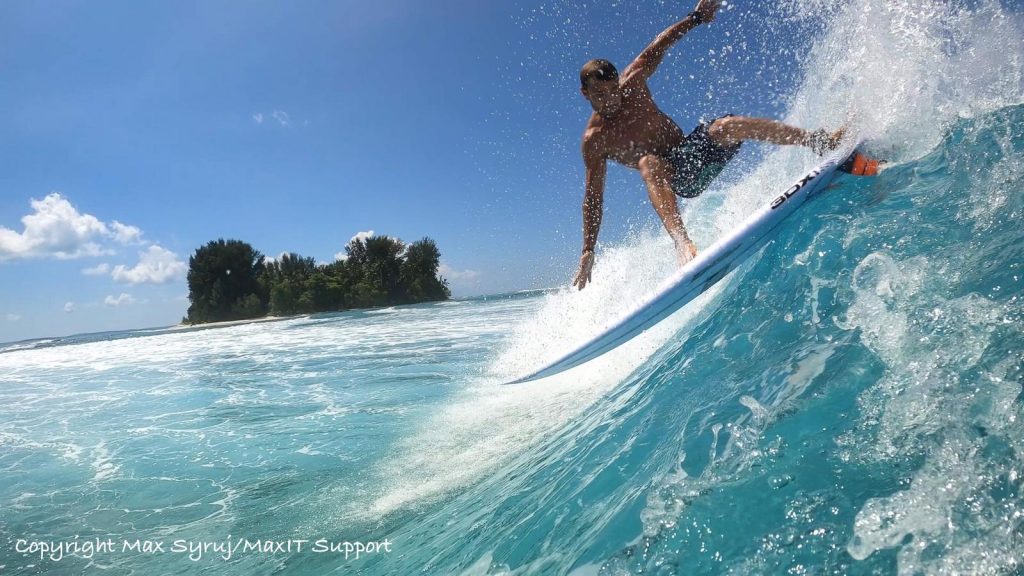 A world class left hand that is super playful given the right conditions. It has a nice wall that is set up so you can really carve the hell out of the lip and a few nice sections to get some Barrel time. SW wind is off shore and the swell has to be from the N-NE. Only surfable on the mid to high tide as the reef is very shallow at some points. Only mid to high level surfers need apply.

A right-hand breaking wave at the southern end of the reef. This break is best surfed with no wind and glassy conditions, but it is protected somewhat from NE winds if they are not too strong. Best swell direction is NE, but as it is a very shallow reef, it’s only surfable on mid to high tide. Easy take-off, but becomes faster down the line and barrels on the inside.

This small island is a swell magnet and the place to head for when everywhere else is flat. It breaks left and right, depending on the swell direction, but the right is usually the better wave. As it is quite open to the elements it’s best surfed with glassy conditions, although it is protected from NE winds if they are light.  Best swell direction is N to NE up to1m. Better for short boards on a run-out tide. It breaks in deep water, so it’s quite safe, even for reef surfing newcomers.

This is a right-hander that breaks on the southern end of the island. The quality of this wave depends greatly on how the sandbar that juts out at the end changes. The wave breaks fairly close to shore in deep water. This can be a very long wave on a big swell. The island itself is beautiful and the boat can pull up behind the sandbar safely. North swell is best, east winds are off-shore, but the break is protected from light NE winds.
There is also a left-hander at the north end of the island, but it will only work when all the conditions come together at NNW swell, S – SW winds as the reef is quite exposed. It’s surfable on a mid to high tide.

Most of this island has straight, unbroken reef, but there is a right-hander in front of the passage between Bangatan and Tagalop Islands. The reef comes into the island a bit more and picks up quite a lot of swell. It’s only surfable at mid to high tide as most of the reef is exposed at low tide. S/SW winds is off-shore, best swell is N – NE.

A fun right-hander in front of a small village that is surfable at all tides and breaks close to shore. Best on a northerly swell or larger NNW swell, SE wind off-shore.

The reef juts out on the northern side of the island, providing a nice right hander which picks up on a NE swell. SW winds are off-shore and the wave horse-shoes around the reef.

A left-hander at the northern end of the island that breaks into the passage. SE wind is off-shore, but it’s protected from light NW winds. If all conditions are right, it can be a very long wave, very fast breaking and tubing inside in sections! The reef is exposed at low tide, so this one is only surfable at mid to high tide. Best swell direction is N – NW.

A fun left-hander just up from Senta Pass where you’ll get a few nice turns. A great spot when the swell is from the NE, which means Senta Pass is not working so well. It doesn’t pick up that much swell but is sheltered from a light NW wind, and SW is off shore. Can be surfed on a mid to high tide and by all level of surfers.

A hollow left-hander that’s fast with a nice barrel section off the take-off. It’s out the front of Bangatan Island. It picks up a fair bit of swell so can be good with any swell from the North. Off shore wind is SW. The reef is shallow so I’d suggest surfing on a mid to high tide.