In 2013, we started to visit a couple of nearby islands to protect turtle eggs. During a visit to one of the islands, we had stumbled across locals who were poaching the eggs, something we hadn’t realised was such a big problem here. Sure, we had seen the occasional turtle sold at the market, but we weren’t aware that the eggs were also a food source. A bit naive, probably, not to realise that locals would eat turtle eggs just like we eat chicken eggs.

Ever since then, from mid-September till the end of March, we travel to those two islands daily to beat the locals to the nests, and hence protect the eggs. We check for new turtle tracks that weren’t there the day before, follow them to locate the nest, then dig up the eggs carefully. They are placed into chicken egg cartons and transported to Lissenung, where they are placed in nesting boxes in a nest that is as similar to the original one as possible.

We work with scientists from Australia and around the world, including providing turtle eggs and live hatchling numbers, providing DNA tissue samples and tagging turtles. 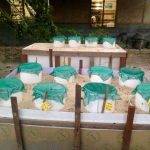 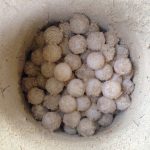 Chivas, our 13-year old LabradorX, loved turtles! His best friend was Lissy, a green turtle, who lived off Lissenung Island beach for 2 1/2 years. She used to come in to feed on the seagrass in the shallow area, and sometimes brought up to 6 friends with her.

Unfortunately, Chivas died of old age (he was 15) in April 2015, but he would sit on on the beach and wait for Lissy to pop up to the surface for a breath, and as soon as he spotted her head out of the water, he’d be off like a frog in a sock. You can tell from the video that he knows exactly where the turtle is as he swims right above her. Every now and then, he had to come back to the beach for a break, but he’d be back out there as soon as he saw the head pop up again. Lissy wasn’t fussed by all this, in fact we rather think she enjoyed the strange friendship. In October 2011, she didn’t turn up for a few days, then weeks, with Chivas all the while patiently waiting in the water every afternoon. He eventually gave up and got quite sad. On an island as small as Lissenung, there isn’t much to do for a dog, and now he was back to snoring the days away. Then, one day in May 2012, Nozaki and I were on the beach and saw a turtle, so we called Chivas. He got very exited, ran into the water and started swimming with the turtle, which turned out to be Lissy! She had a distinct mark as her right back flipper has been cut off, possibly by a boat propeller, judging by the rather straight edge to the cut. We think she went back to where she was born to lay her own eggs in the months that she was gone, but obviously missed Chivas and Lissenung enough to come back here. Now, you have to remember that there are 149 islands in the New Ireland Province alone, so she could have chosen any, but instead, she decided to come back here. Aaaaaah, true love!!!!!